A Little History About The Club Sandwich… 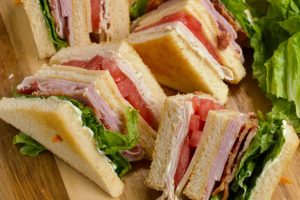 We don’t know who invented the sandwich, but it has existed in various forms for thousands of years. One of the earliest known sandwich-eaters was Hillel the Elder, a rabbi and scholar who was born in Babylon and lived in Jerusalem during the first century B.C. It’s not clear why the English politician John Montagu, a.k.a. the 4th Earl of Sandwich, became the namesake of the food we call a sandwich. The first known use of the word “sandwich” comes from the diary of the English historian Edward Gibbon. In this blog we would like to tell you the history of the Club Sandwich.

Who Invented The Club Sandwich?

From what is now known as the Canfield Casino in Saratoga Springs, New York, you can still see the historic building in Congress Park that was once known as the Saratoga Club House. In 1894, the theory is that the sandwich first appeared at the famous Saratoga Club House. It was an exclusive, gentleman only gambling house where potato chips were also born. Women were not permitted in the gambling rooms. In “Seven Hundred Sandwiches” which was published in 1929 by Florence A. Cowles, she says “A man came home late and hungry from his club one night raided the ice box and made himself a super sandwich which he dubbed the Club. He took the recipe to his Club and the rest is history. The foundation is always toast, meat, salad ingredients and mayo.”

How Is A Club Sandwich Made?

You start with cooked chicken breast and bacon, along with ripe tomatoes and crisp lettuce layered between two or three slices of toasted bread with mayonnaise. The oldest recipe for the sandwich appeared in the Good Housekeeping Everyday Cookbook in 1903.

The 1904 World’s Fair in St. Louis helped popularize the Club sandwich with four of the restaurants there serving their own version of the Club Sandwich. More new American foods were invented at the 1904 World’s Fair in St. Louis, Missouri, than during any other single event in history. The list includes the hamburger, hot dog, peanut butter, iced tea, the Club Sandwich, cotton candy, and the ice cream cone, to name just a few. If all the pop histories and internet stories have it right, American food would be almost unrecognizable if the 1904 World’s Fair had not been held.

America’s signature sandwich is as comforting as it is elegant, as down-home as it is glamorous, and at your service, worldwide, 24/7. Groucho Marx famously said, “I don’t want to belong to any club that will accept me as a member.” Fortunately, the Club Sandwich imposes few rules, minimal dues, and no restrictions on belonging. James Villas, the redoubtable food critic of this magazine for 27 years, called it “the quintessential American dish.” It is, indeed, democracy in action: a staple of the neighborhood diner, the local country club, the five-star resort. (It is virtually synonymous with room service.) Wallis Simpson made it for Prince Edward, prompting enduring British ardor. The Grand Hyatt in Melbourne, Australia, has been said to turn out 9,000 a year. Le Figaro subjected the “meilleurs Club Sandwich” of Paris to rigorous tests not long ago, declaring the specimen at Le Meurice the victor. Enjoy with pickles, chips, fries, salad, fruit, or onion rings, Coke or an iced tea. 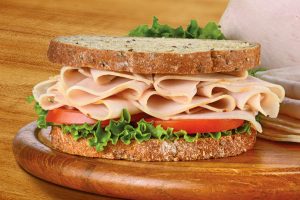 What makes Rt 17’s sandwiches the best deli sandwiches? Fresh ingredients, known brands, great quality, and made-to-order. Everything about a Rt 17’s Deli sandwich is delicious. Every deli item is thoughtfully selected to provide the best combination of flavors and delight a wide array of tastes. At Rt 17’s Deli we choose great quality meats, cheeses and ingredients, providing our customers with a wide selection of their favorite deli items made to order and in our grab and go.
> Learn More