A Short History of U-Haul. Did You Know You Can Rent a U-Haul Truck From Us?… 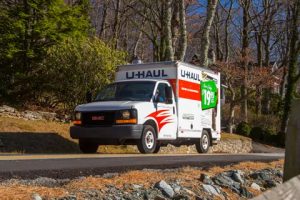 In 1945, couple Sam and Anna Shoen needed to move from California to Oregan when Sam was discharged from the Navy after World War II. The couple kept searching for a rental trailer to bring their belongings, but had no luck. They quickly realized there was a need for better access to moving equipment, which was quite expensive. They wanted to find a way to cut costs, and increase availability. They had the idea for a large group of people to share the cost of the equipment, and everyone getting to use it when they needed it. This made the cost of each person’s moving expenses more affordable, as well as more convenient. Sam was especially fascinated with making the idea a “one-way rental” involving more than one location – due to the nature of the rental being mostly for people moving cities, and not wanting to make a return trip to bring the trailer back. During their drive to Oregon, the couple hashed out the details and planned, and after their move, the Shoen’s gathered their money and savings and prepared to bring their idea to fruition.

The Start of U-Haul

The Shoen family began their business in the summer of 1945, only two weeks after their big move. They developed the company name, “U-Haul,” and painted all their trailers bright orange, so that people could easily identify them, and it would draw attention to their new business. They set their prices at $2.00 per day, and opened the first location in Los Angeles. Within 6 months, they had four locations total across the coast of California to Oregon, and owned a total of 30 4’x7’ trailers. They recruited employees and set up a commission payment agreement for rental agents.

It Wasn’t An Easy At First

At first, the quality of the trailers were causing problems for Sam and Anna Shoen. They were breaking down frequently, as Sam had been building them from junked car and truck parts. The repairs were costing as much as they were making in their new adventure. However, Sam was determined to make the U-Haul company work, and the family sold their home and moved in with Anna’s parents. Sam used that money along with some credit from a local lumber dealer to begin making better trailers. He made a deal with some of his Navy contacts to obtain and use surplus steel left over from the war. He used this material in the new trailers as well.

With the Shoen’s big dream, and their hard work, U-Haul became famous quite quickly. They grew from owning 30 trailers their first year, to having trailers and rental locations throughout the entire country and parts of Canada by 1950.

In 1952, the Shoen’s changed their business to allow individuals to purchase and own fleets of 30 trailers, and have a contract through U-Haul for the operation of their fleet. U-Haul shared the income with fleet owners, by running operations. Only 14 years after the Shoen family started U-Haul, it had grown to a fleet of 42,600 trailers.

You can Pickup and Drop Off U-Haul Trucks at Rt. 17 Express