Do You Love Pizza And Good Stories? We Would Like To Tell You About The Beginning Of Pizza In The USA! 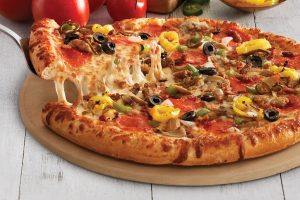 Most pizza history you read says that pizza started in Naples, Italy, but actually the Greeks brought flat and round cheese pie to Southern Italy when they colonized the coastal areas in the 8th century B.C. Pita means pie in modern Greek and might be the forerunner to the name pizza. In the Mediterranean Basin, the idea of a flat yeast bread covered with baked on toppings is hardly unique to Italy. France has passaladiere garnished with onions, anchovies, garlic, and olives. Spain has coca garnished with red bell peppers, olives, tuna, sardines, and onions. Turkey has lahmacun garnished with lamb and a tomato mixture. However, in the 16th century the name pizza was introduced in Naples, Italy when Neapolitans tried it with tomato and mozzarella cheese.

In 1830, Antica Pizzeria Port’Alba was opened in Naples. This was the world’s first pizzeria. It became a meeting place for artists, students or others with little money so, in most cases, the pizza was simple. The poor workers of Naples were eating the earliest pizza, garnished with tomatoes, cheese, oil, anchovies, and garlic, just like we do today.  While in Naples in the 1830s, Samuel Morse (the inventor of the telegraph) apparently described pizza as ”a piece of bread that had been taken reeking out of the sewer” a species of the most nauseating cake, covered with tomatoes and sprinkled with little fish and black pepper.  Wedged between two bookstores, the pizzeria is still in business today serving Neapolitian style pizza and beautiful pastas.

Pizza Finally Recognized By The Well-To-Do

Is this legend true? In 1889 King Umberto and Queen Margherita of Italy visited Naples. As the story goes, when the royal family was in Naples, they stayed at the ex-Bourbon Royal Palace. A few blocks away from the palace, just off of Via Toledo is a ristorante cum pizzeria named Brandi, one of the most historical of such establishments in Naples. Their chef, Raffaete Esposit concocted a pizza Margherita for Her Royal Highness and took it over to the palace, himself. The colors of the makings—green (basil), white (mozzarella) and red (tomato)—stood for the national colors of the new nation of Italy. Brandi pizzeria received a thank you note signed by Galli Camiio head of the royal household dated June 1889. Queen Margherita, wife of Italy’s King Umberto I, is said to have enjoyed Brandi’s combination of tomatoes, mozzarella, and basil so much that she called on the pizza maker on each subsequent visit to Capodimonte. Thus was born the Margherita pizza, a recipe quickly copied across the city and turned into a pizzeria staple. The letter is still hanging on the wall of the Brandi Pizzeria. Esposit made a major contribution to the pizza world as he was the first Neapolitan to wed mozzarella to tomatoes.  Sometimes this legend is disputed but it caused pizza with mozzarella cheese to be born. Between 1880 and 1950, 25 million Italians left Italy in search of work heading to other parts of Europe and the Americas.

Pizza in America was becoming popular in Italian neighborhoods because of the sheer number of Italian immigrants in the late 19th century. It was the 1st half of the 20th century before most non-Italians ever heard of pizza. Flippo Millon, who emigrated to the U.S. in the 1890s started six pizzerias. Gennaro Lombardi took over one of those pizzerias in 1905 at 53 Spring Street in NYC. Gennaro Lombardi crafted pizza in the United States using his baker’s trade he learned from Naples. Lombardi is credited with developing New York Style pizza. Lombardi’s New York Pizza has been recognized by the Pizza Hall of Fame as the first pizzeria in the United States. Lombardi’s is still located in the Little Italy section of Manhattan.

From the 1950s and onward, the rapid pace of economic and technological changes in the U.S. changed pizza’s place in America forever. As Italian food migrated from city to suburb, the popularity of pizza boomed. Dean Martin had a number one hit with “That’s Amore. ” I Love Lucy had a segment at a pizza parlor and Jackie Gleason had a take-out pizza skit that was fun to see on a Honeymooners episode. Stars like Frank Sinatra, Joe DiMaggio, and Jimmy Durante were seen eating pizza. Now pizza was in the same category as hot dogs and hamburgers. As refrigerators and freezers became common, the first frozen pizza was introduced in 1957. With the growing availability of cars, the first delivery was done in 1958 by Pizza Hut then Little Caesars in 1959 and Domino’s in 1960. You can now get a delicious slice of pizza at your local gas station or deli, thin crust or regular crust with 10 different toppings.

Original & Thin Crust
The Original Crust is a self-rising 12” crust covered in Hunt Brother’s signature tomato sauce and 100% natural part-skim mozzarella cheese. With cheese spread to the edge of the crust, there is nothing basic about this classic.