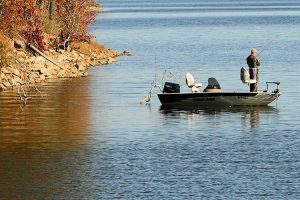 As an angler yourself, you might be wondering which lakes in Kentucky bring the best fish. Thankfully, we have done our research and the answers you need all things considered. If you didn’t know, Kentucky is the second state with miles of navigable water in the nation– the only state ahead of the Bluegrass is Alaska. With ample water comes plenty of fish. That in mind, we are not going to explore rivers, streams, or creeks. We know there are great fish to be caught in the Ohio River, Licking River, Green River, and Cumberland River, and several others. While Kentucky is no stranger to creek fishers in Clear Fork, the Elkhorn, Beargrass Fork, etc, that is not our focus today. Instead, this article will discuss the best lakes in the state for angling.

How We Picked The Best Fishing Spots

Situated in central Kentucky, Nolin River Lake is close to Nolin Lake State Park and Mammoth Cave State Park. This lake offers many marinas and is a great option for anglers across the state. At 2,890 acres, Nolin River Lake’s size is sure to impress. Anglers stand a chance at catching several different species including bass, crappie, walleye, and catfish. While no anglers have caught a state record fish at Nolin River Lake, the lake is known to provide consistent quantity and size for the species listed above during various parts of the year. Hoping to catch a fine largemouth bass? Hit the waters between early spring and late fall. White bass are a popular catch during late spring and into early summer. Crappie fishing is most successful at Nolin River Lake in early spring and throughout the summer. Winter has proven to be a difficult time to fish due to the fluctuating water levels.

With 3,600 acres there are plenty of spots to reel in a good catch. Herrington Lake has a lively variety of species that attract all sorts of anglers. Popular fish species at Herrington Lake include largemouth and smallmouth bass, crappie, catfish, bluegill, white bass, spotted bass, and hybrid striped bass. Fun fact: In 1957, B.B. Hardin caught a 5 pound white bass on Herrington Lake. This bass was the same size as the record fish caught on Kentucky Lake in 1943 so the two share the title of the state’s biggest white bass.

With only 784 acres, Cedar Creek Lake is one of the smaller fishing holes in Kentucky. However, it is the second largest state-controlled lake in the Bluegrass. Cedar Creek offers access to bank fishing, multiple boat ramps, and some exciting developments that are in the works which include a public beach and marina which is sure to be a hit for visitors. Anglers might be lucky enough to catch crappie, trout, bluegill, channel catfish, and smallmouth bass. But the more sought after fish on Cedar Creek Lake– largemouth bass. Anglers consistently report reeling in largemouths ranging between 3 and 5 pounds. And it would not be unusual to catch bass weighing 8 pounds here.

Positioned in the north-central region of the Bluegrass State, Taylorsville Lake is easy to access for anglers from across the state and even in neighboring states like Indiana and Ohio. This 3,050 acre lake is in 3 counties– Anderson, Nelson, and Spencer. Whether you prefer fishing from the shore or on a boat, Taylorsville Lake can accommodate. However, be aware that the lake is popular for recreation and you can expect increased traffic during holidays particularly Memorial Day, the 4th of July, and Labor Day. With heavy recreation on the waters, fishing is often compromised. For that reason, anglers enjoy early morning or late evening and night fishing during the summer.

At a whopping 53,000 acres, Lake Barkley stretches 134 miles and boasts over a thousand miles of shoreline. The well-known Land Between the Lakes National Recreation Area separates Barkley from Kentucky Lake. With its large size, it is no surprise that Lake Barkley is located in Livingsong, Lyon, and Trigg counties and even crosses the state border into Tennessee. Since it is located in the south-western part of the state, Barkley can be a journey for many anglers in the state. However, those in Illinois, Indiana, and Tennessee have easy access to the lake. Lake Barkley currently holds two state fishing records for yellow bass and logperch. Neither species is viewed as significant but a record is a record, right? In 2009, a 1 pound 6.4 ounce yellow bass was caught on the waters. And in 2013, a .08 log perch was caught at Barkley. Anglers hoping to catch a larger and more known species will not be disappointed at Lake Barkley. This lake has produced excellent bluegill, sauger, catfish, white bass, smallmouth and largemouth bass, and crappie fish, reaffirming that it is one of the best lakes to fish in the Bluegrass.  If you like a good marina, Lake Barkley has several. These include Kuttawa Harbor Marina, Buzzard Rock Resort and Marina, Eddy Creek Marina. Need more bait? Check out Tom & Barb’s or the Cabin Bait and Tackle Shop.

You can’t leave out Dale Hollow Lake when you are compiling a list of the best lakes to fish on in Kentucky. Situated on the Tennessee and Kentucky border, this lake has brought quite a few record setting fish to the books. In 1955, David L. Hayes caught a record setting smallmouth bass weighing nearly 12 pounds. To this date, no one worldwide has caught a bigger smallie– think you can? While Hayes’ trophy catch remains the only Kentucky state record caught on Dale Hollow at this time, it previously had a couple other record breaking fish that have since been topped. A 12 pound, 12 ounce lake trout and 43 pound muskie were previous record holders caught on these waters. Aside from these chart toppers, Dale Hollow offers a solid supply of good sized fish varying in species. Here you may reel in fish including white crappie, black crappie, freshwater drum, bluegill, muskie, channel catfish, walleye, red-ear sunfish, largemouth and smallmouth bass.

Just west of Lake Barkley, on the other side of Land Between the Lakes National Recreation Area, sits Kentucky Lake. With over 160,000 acres, it is the largest man-made lake east of the Mississippi and it is one of the best lakes to fish in the Bluegrass State. Kentucky Lake currently holds the record for the largest of these fish…

Some of the best bluegill, smallies, largemouth bass, red-ear sunfish, white bass, and sauger call Kentucky Lake home. Each year, professional anglers head to Kentucky Lake for several tournaments like the Legacy Marine Open Trail, the Kentucky Bassmaster Classic, FLW College Fishing events, the Toyota Series, and more. Are you hoping to enter a tournament on Kentucky Lake this year?

Last but not least, Lake Cumberland which is probably not a surprise to you if you are familiar with the area. Spanning 65,000 acres and six counties (Laurel, Clinton, Pulaski, Wayne, Russell, and McCreary) in the southern parts of the state, these waters are also a favorite for Tennessee anglers. Lake Cumberland, in addition to its tailwaters, have seen their fair share of record setting catches. Current Kentucky state records caught on the waters include…

In addition to these impressive catches, anglers may reel in some of Kentucky’s finest fishing for quite a few other game fish. Other popular species on the lake include trout, crappie, walleye, smallies, white bass, and largemouth bass. 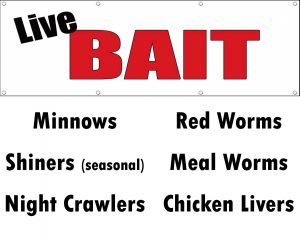