The 10 Most Popular Pops, Sodas, and Soft Drinks… 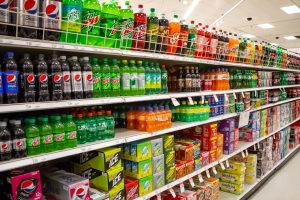 Pop, soda, soft drink. There are many names for this can, bottle, fountain drink of carbonated sweetness. Consumers look in addition to carbonated sweetness to caffeine and low-calorie alternatives. However, soda consumption remains a big business in the U.S. The following gives you a little trivia and lets you know which soda is the most popular…

This lemon-lime-flavored noncaffeinated drink was launched in 1920.  7-UP is a low-sodium carbonated soda option; used in cocktails, mocktails, cooking, and baking.  It is part of the Keurig Dr. Pepper group.

Sunkist is the orange-flavored soda that first hit U.S. stores in 1979.  From late 1986 until 2008, it was produced by Cadbury Schweppes. Following the demerger of Cadbury Schweppes Americas Beverages, it is now produced in the U.S. by Keurig Dr. Pepper.  The advertising slogan was “fun, sun, and the beach” using TV and radio commercials with The Beach Boys’ hit song “Good Vibrations” as the brand’s theme. In 1980, Sunkist Orange Soda became the #1 orange soda in the U.S.  Sunkist is the only orange drink that contains caffeine. (19 mg per 12 fl oz).

Sierra Mist is Pepsi’s lemon-lime-flavored soda drink that was introduced in 1999.

Fanta originated in Germany as a Coca-Cola alternative in 1940 due to the American trade embargo of Nazi Germany, which affected the availability of Coca-Cola ingredients. Fanta soon dominated the German market with three million cans sold in 1943. The current formulation of Fanta was developed in Italy in 1955. It is made with 5% fruit juice and comes in a variety of flavors but most prominently orange.

The lemon-lime drink known today as Sprite was developed in West Germany in 1959 as Fanta Klare Zitrone (“Fanta Clear Lemon” in English) and was introduced in the United States under the Sprite name in 1961, as a competitor to 7-Up.

Tennessee bottlers Barney and Ally Hartman developed Mountain Dew as a mixer in the 1940s. “Mountain Dew” was originally southern and/or Scots-Irish slang for moonshine.  Soft drinks were sold regionally in the 1930s, and the Hartmans had difficulty in Knoxville obtaining their preferred soda to mix with liquor, preferably whiskey, so the two developed their own.  In 1964, Pepsico acquired the rights to Mountain Dew.

Dr. Pepper is a carbonated soft drink. It was created in the 1880s by pharmacist Charles Alderton in Waco, Texas, and was first served around 1885. Dr. Pepper was first nationally marketed in the United States in 1904 and is a blend of 23 fruit flavors.

The drink’s founder Caleb Bradham initially intended the carbonated drink to treat people with digestion problems or stomach aches. Pepsi was first invented in 1893 as “Brad’s Drink” and was sold in Caleb Bradham’s drugstore in New Bern, North Carolina. It was renamed Pepsi-Cola in 1898. It was called “Pepsi” because it was advertised to relieve dyspepsia (indigestion) and “Cola” referring to the cola flavor.

Unveiled on July 8, 1982, and introduced in the United States on August 9, 1982, it was the first new brand since 1886 to use the Coca-Cola trademark. The product quickly overtook the company’s existing diet cola, Tab (which was discontinued in 2020). Diet Coke has its own distinctive flavor that is quite different from Coca-Cola. Coke Zero Sugar, on the other hand, is meant to mimic the taste of the original Coca-Cola, just without all that pesky sugar.

Since its birth at a soda fountain in downtown Atlanta, Georgia, in 1886, Coca-Cola has been a catalyst for social interaction and inspired innovation. Pemberton originally touted his drink as a tonic for most common ailments, basing it on cocaine from the coca leaf and caffeine-rich extracts of the kola nut; the cocaine was removed from Coca-Cola’s formula in about 1903.