The History Of Fried Chicken Will Surprise You… 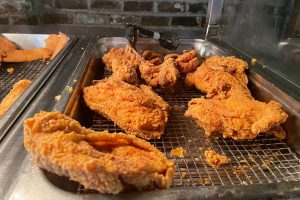 Starting in the early 1700s, the group that would come to be called the Scotch-Irish or Scots-Irish began migrating to North America in large numbers. Both groups influence each other, beyond their shared Gaelic and Celtic heritage. Before the American Revolution, more Scots-Irish emigrated to the American continent than almost any other group, and it is estimated that at least 250,000 Scots-Irish lived in the American colonies by the 1770s. Many of those individuals eventually made their way to the Appalachian Mountains. Bluegrass music specifically, with its strong reliance on storytelling and instruments like the fiddle, was heavily influenced by music traditions from both Scotland and Ireland. The Appalachian quilting tradition can also be traced back to Scots-Irish culture, as can the practice of making moonshine. Additionally, the southern Appalachian square dance similar to the Celtic reels. Plus the Scots-Irish originally built the first rock fences in Kentucky. But here is the surprise – in The Encyclopedia of American Food and Drink first published in 1983 by John F. Mariani, it is noted that “Almost every country had its own version of fried chicken from Vietnam’s Ga Xao to Italy’s Polo Fritto and Austria’s Wiener Backhendl. But the Scottish, who enjoyed frying their chicken rather than boiling or baking them, as the English did, brought this method with them when they settled in the American south. So, the American food called Fried Chicken is another southern culture practice that is Scots-Irish.

Until World War II, fried chicken in the US was considered a food for special occasions. These days it’s become so widely available that people eat it whenever the mood strikes. You can even find delicious fried chicken at mini marts. They fry it up fresh every hour and it is worlds away from KFC. According to the US National Chicken Council, the average American ate 28 pounds of chicken in 1960. Americans now eat about 99 pounds of chicken each year. That is a considerable amount more than the 57 pounds of beef 57 or the 53 pounds of pork 53 we consume! 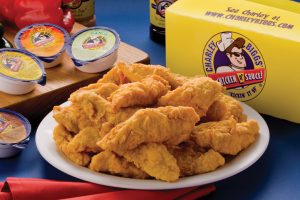 Do you Love Fried Chicken? Route 17 Express Has You Covered!

Charley Biggs’ Chicken is carefully marinated, double-battered, and cooked fresh in our stores every day. A tasty blend of superior seasonings and hot, juicy chicken is always ready for lunch, snack or dinner. When combined with any of our specially blended dipping sauces, the taste of Charley Biggs’ Chicken & Sauce simply can’t be beat.
> LEARN MORE